We may have stumbled upon the craft fair at Centennial Park, but we stopped by to see the full-scale replica of the Parthenon. Some refer to it as the “Athens of the South” and we have to say it was pretty impressive. We spent some time marveling at all the details and how small we felt among the soaring columns.

After we needed a caffeine fix so we headed to Three Brothers. The cafe was opened by the owners of the outdoor gear shop next door, Cumberland Transit, and it has an outdoorsy eclectic style to match. An array of art adorns the walls, along with bike part decor and hanging chairs. They have quite a few unique choices on their drink menu as well as some amazing sounding specials, but like I said we needed a caffeine fix, so Cailin went with the “Hard Core.” If you’ve ever felt like you needed an IV of coffee this could be the next best thing as it is a double espresso and coffee! I didn’t want to get too jittery so I snagged some sips from Cailin and it was definitely strong, but had a great taste. 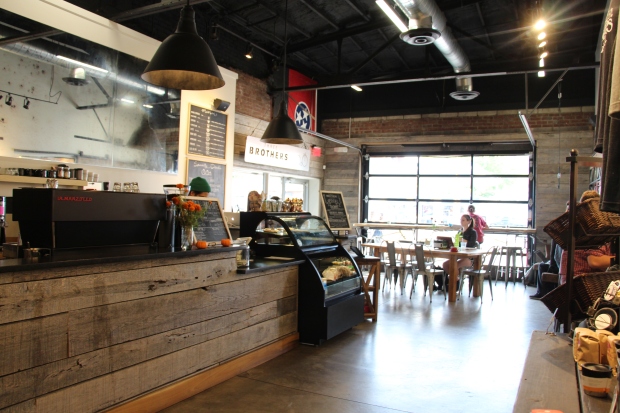 Before we headed out, we also had to stop in their alleyway done up by DCXV Industries, the creators of the “I Believe in Nashville” mural project. It has the coolest design and is an excellent backdrop for photos.

With energy to spare we hit our next stop, The Grand Ole Opry. We wanted to check out the iconic venue and thought their Front Porch Party was the perfect time to check it out.  At The Grand Ole Opry Front Porch Party they have live music from local artists, food trucks and outdoor games! The lines were kind of crazy at the food trucks, but we stuck one of them out and got some great Korean food. We spent the rest of the evening listening to music and taking in the venue that so many iconic stars have played in.

All about the floral and pastel. Check out our new post with these fun spring outfits!
Pro-tip: if you’re tired of tapioca balls exchange it for fruit jelly. It’s delish and it doesn’t get up your straw as much, so you don’t have to constantly chew. 😂
Having siblings is next level amazing! If you’re grateful for your big and lil bros/sistas let them know in the comments! ✨
Keep showing up - for people, your calling and your life. It isn’t always easy to keep persevering through difficult times, but when you consistently show up the joy of the Lord will meet you where you’re at.
One of our fave museums // been wanting to take photos in this room for so long cause look at all those 💡💡💡
Back on the blog insta but you can see what we’ve been up to on our personal accounts while we were MIA! @cailin_burke & @tburke05 💕
Saturday ~ m o o d ~ 💫
When it’s finally sundress season >>>>
Follow Castle Foundations on WordPress.com