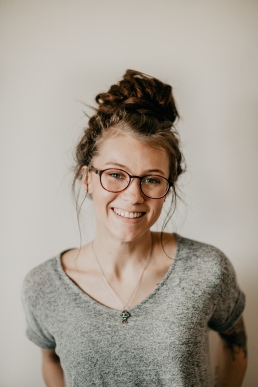 Today we’re so excited to feature Kayla Glenn of GlennCoFinds! What makes it so exciting is 1. Her shop is AMAZING and 2. She just happens to be our very first shop owner of vintage and antique goods! We not only love the items she curates, but also how enthusiastic she is about purchasing items that have a story and a background — making them so much more unique! Successful thrifting and antiquing is not an easy task, and Kayla has a lot of great tips for making your trips really pay off with some incredible finds. We are huge advocates of filling our homes (and closets!) with previously owned items, and GlennCoFinds is the perfect place to begin your journey to making your own space more individualized. Keep reading to learn all about the background of Kayla’s shop and to seriously swoon over the unique treasures that GlennCoFinds discovers.

: Tell us a few things about yourself!

: Hi! My name’s Kayla and I’m a 23-year-old wife living in Iowa City, working full-time as a nanny to the two squishiest turkeys in all the land. Jesus is my reason for being, I’m a college drop out, have 1,632 hobbies, love making things fit perfectly into my trunk, and classic rock comes out on top of the music chain in my world. I am also incredibly sarcastic, which makes my personality seem quite strange through writing. 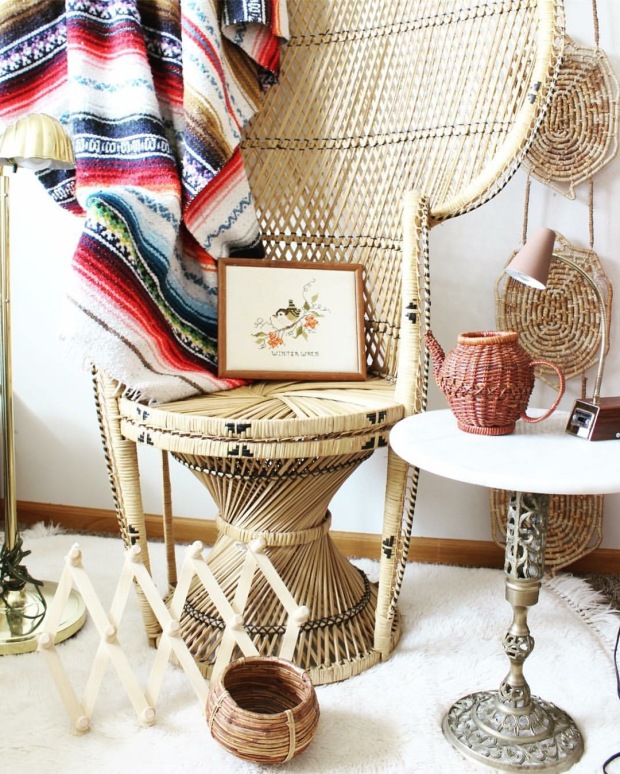 : All of the products you’ve found for GlennCoFinds are so one-of-a-kind and stand out pieces! What kinds of items initially grab your eye and how would you describe the items you fill your shop with?

: Mid Century pieces are hands-down my favorite things to find. The easiest way to find mid century pieces for me, is by looking out for colors. Pretty specific color pallets were used in the 50’s and 60’s so this makes it a bit easier to spot items on the surface. Interesting enough, most of the items actually in my shop aren’t mid century. These pieces are becoming harder to come by as this style is coming back into rotation for the general public. I also get really pumped when I find something totally weird and unusual. Fact: I wanted our wedding theme to be weird and unusual and my mother wasn’t having it. Anyway, trying to describe my items as a whole is darn near impossible, which makes my collection eclectic, I suppose.

END_OF_DOCUMENT_TOKEN_TO_BE_REPLACED

Yes I made up the word “museuming” but it’s the best way to describe how Tara and I spent our spring break this year. Although part of me wishes we whisked off to a tropical location and got some sun on the beach, my new job didn’t want to give me a lot of time off. I made the best of it though and used my few days off to catch up with family and friends. One of the days, my parents were nice enough to take a day off from their jobs and go on a little road trip with us. We ended up in Massachusetts and spent the day going through the Berkshire Museum. Although when we first walked in I was a little skeptical because it seemed children-oriented, it ended up being a really interesting museum!

Tara and I went through the children’s interactive section and did all of the activities which was actually pretty fun. One section had arts and crafts materials and asked us to create something cool with what was provided. I made a little flower bouquet and Tara decided to make a lion with the coffee filters they had there. We then moved onto the next section where you had to draw your own version of a Buddha statue the museum had displayed. They even provided easels and a wall where you could hang your final drawings up! Tara and I love to draw but with school and work, it’s hard to find the time, so it was fun to do a quick 5 minute sketch. The whole point of the section was to be creative and innovative and they had great quotes all along the walls that had this same message. We then moved onto the rocks, animals, and dinosaur sections and I definitely felt like I was back in elementary school. Since I learned all about that stuff so long ago it was nice to get a refresher, see all of the sparkly rocks and minerals, and some of my favorite animals. 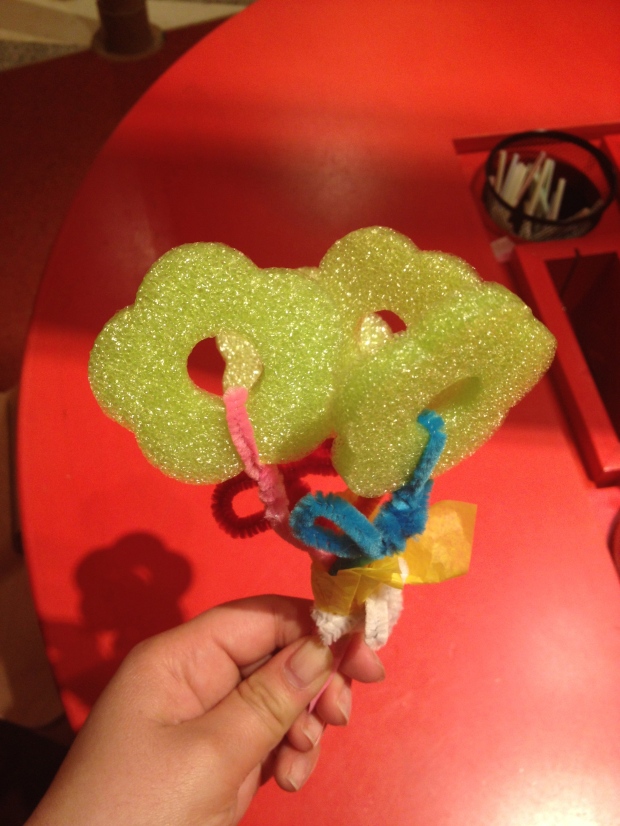 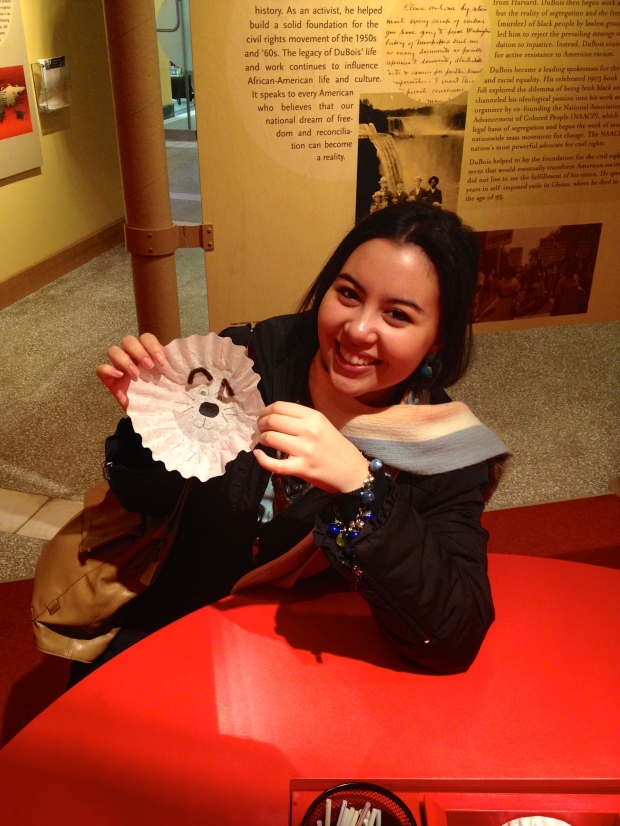 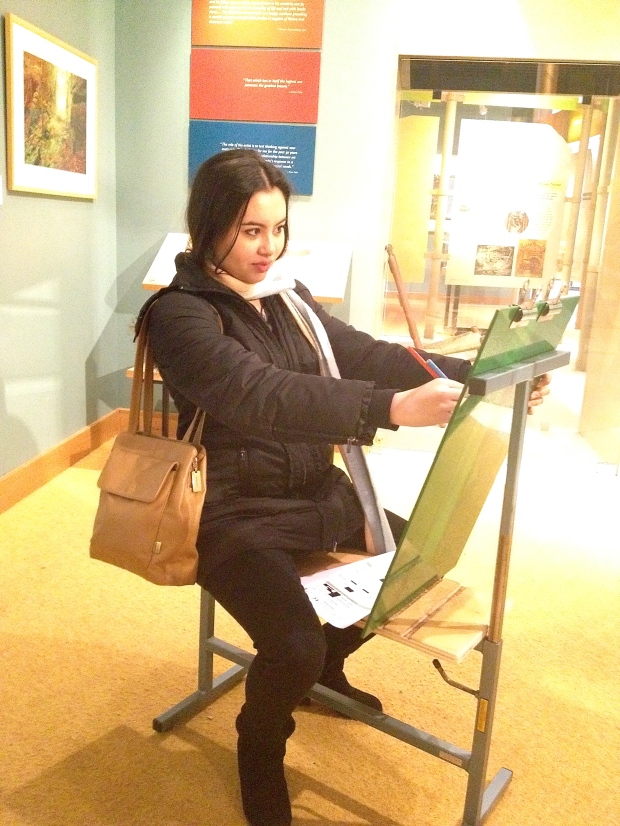 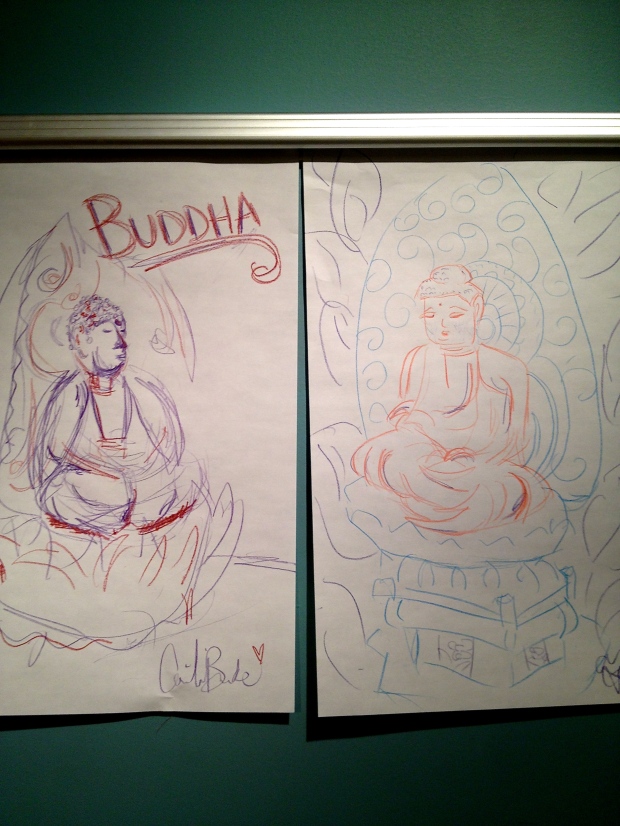 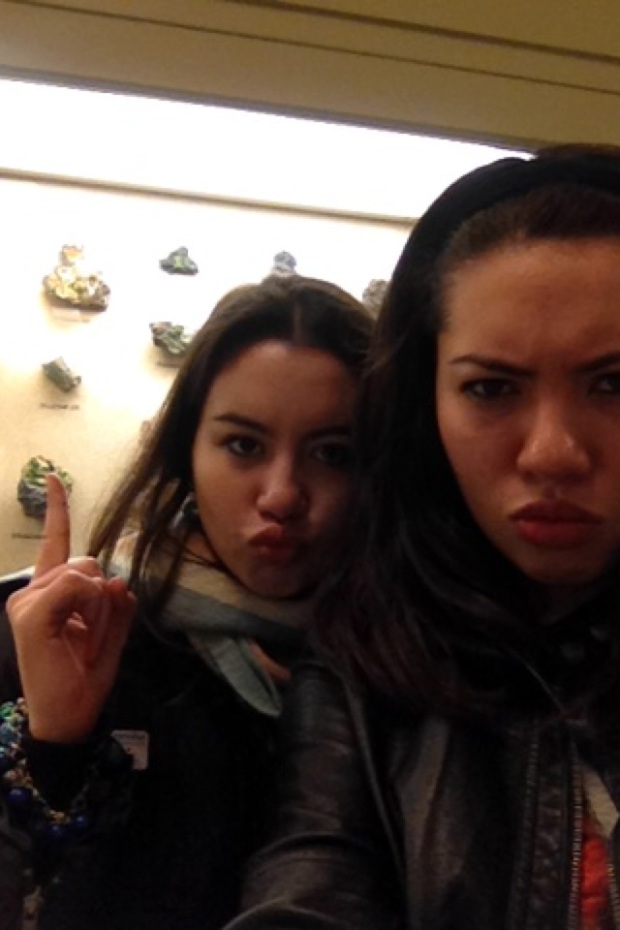 The next section was my Mom’s favorite and was a whole aquarium. She stared at the tropical fish forever while I found myself stuck at the poisonous frog section. Tara and I are planning a trip to Costa Rica this year and some of the frogs there could be found in the wild in Costa Rican rainforests. There were six different species so we spent a long amount of time looking through the leaves to try to find them all. Although it was difficult and a lot of frogs were hiding under logs, we finally did it. Besides the frogs and fish there were a lot of snakes, lizards, and turtles. It was definitely one of my favorite parts up until we went upstairs to the history, art, and antiques section. There they had a Nike statue, a wigwam, an antique bike, and shoes from many different countries. I was fascinated by how small the Chinese foot binding shoes were. They looked just like baby shoes! We then saw paintings in a few rooms with several by Norman Rockwell and ones by Eduoard Manet and Keith Herring. They also had a big empty frame where you could pose for your own portrait! 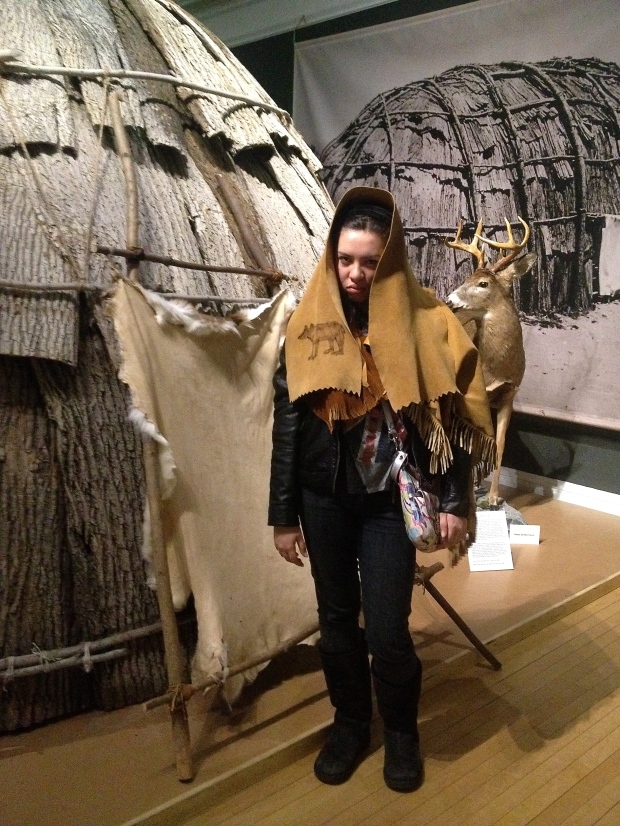 Finally we headed to their special exhibition which was called “Berkshire Collects.” This was definitely my stepdad’s favorite part of the museum and we spent several hours just in this one section. The exhibit involved displaying the collections of various Berkshire residents and the plethora of items are what made it so interesting. I could tell you about every collection there since they were all so fascinating, but I’ll stick to some of my personal favorites. One collection was personalized cartoons where this guy mailed famous cartoonists asking them to sketch him something. He had a pretty large collection of sketches that even had notes written out to him. The cartoonist for Garfield, Batman, Superman, and Pixar’s Up were just some of the coolest ones. Besides that, I loved the collection of presidential paraphenelia. I’m pretty obsessed with Dwight D. Eisenhower’s whole “I like Ike” campaign for some reason and loved all of the “I like Ike” pins the person had. I kept talking about them to the point that a few days later my stepdad actually bought me my own “I like Ike” pin. Best present ever. After we spent a decent amount of time in the museum we were all pretty hungry and headed to dinner.

When you’re in college you love any chance for your parents to take you out to a “real dinner.” We decided to go to a local restaurant and after some calamari, Tara got Jack Daniels steak while I got some chicken/pasta/artichoke/spinach/tomato dish that I forgot the name of. It was delicious and we had to get dessert after of course. That’s when we really treated ourselves and went full out getting the craziest desserts. I chose a Chocolate Guinness cake (If you read my St. Patrick’s Day post you may notice I’m on a Chocolate Guinness kick lately). What made it so cool was that the chocolate Guinness was in the buttercream frosting and then the cake was topped with Jameson ganache and chocolate chips. Talk about a crazy cake! It was really good and unlike any other cake I have ever tasted. Tara’s dessert was pretty wild too and called a Banana Changa. It basically consisted of fried bananas wrapped in crunchy tortillas and topped with caramel. There was also a ton of whipped cream and ice cream on the side. By that time we were  sufficiently full. We had a lot of fun with our family and what I’ve learned from that day is that you should totally take the time to check out the small museums nearby you. Although my favorite museums are the bigger ones like MoMA, the Met, and the Louvre, small museums have something different that none of the famous ones can provide. No matter what museum you go to, you always leave with some new idea, inspiration, or knowledge. In this case, we got all of that and a ton of family time too! 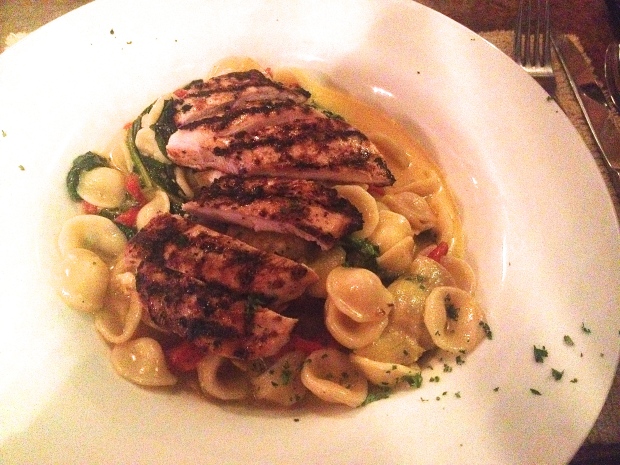 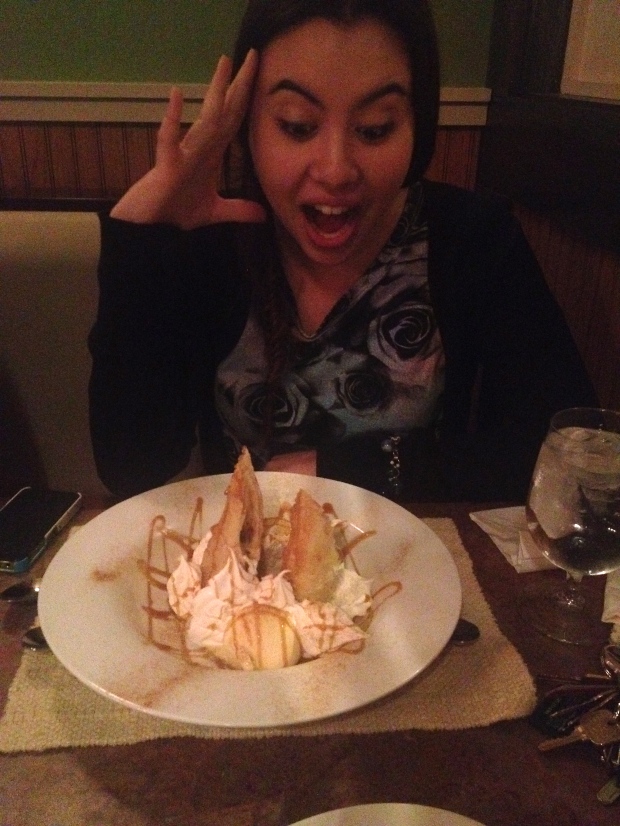